“Can I just say congratulations to the team that put together the online workshop. He is really enjoying it and very engaged. Thank you for saving us during school holidays!” – Faust Online Parent, 2020

“I was absolutely delighted at how these programmes fostered connection and connectivity, the likes I haven't seen from them after weeks of being numbed by virtual learning!” – Faust Online Parent, 2020

“Both boys at their best in the mornings and are highly engaged in these sessions. It has been a joy to observe” – Faust Online Parent, 2020

“These daily sessions really add a moment of joy and give a sense of daily structure to the kids during these strange times.” – Faust Online Parent, 2020

“She thoroughly enjoyed the online drama class, so please thank the teachers for all their efforts!” – Faust Online Parent, 2020

“Thank you for an amazing week! She loved every minute and learned a lot. She stayed engaged the whole time and I appreciate all of the effort put into making it a great memory!” – Faust Online Parent, 2020

“I wanted to congratulate your team on your excellent online workshops. Our daughter loved it.” – Faust Online Parent, 2020

“Please thank the team for the workshops this week. They have done an amazing job in such weird circumstances.” – Faust Online Parent, 2020

“In teaching it so hard to compensate for in-person interaction but Miss Jam and Miss Lizzie showed us just how much is possible when you care. Their energy and enthusiasm translates across any platform. Your dedication to delivering your courses and services has been so reassuring.” – Faust Online Parent. 2020

What a fun filled showed that surprisingly pulled on the heart strings! It started with such fun a frivolity, that when that very tender ending came along it was out of the blue. I loved it. Loved that soundtrack and set, it worked so well. The irreverence of it was so refreshing. More please! And well done to Peter Pan. It was a compelling performance! – Christopher McInnes, Audience Member of Peter Pan & Wendy, 2019

“They have grown from shy little boys to keen and accomplished stage performers conveying confidence and good communication skills in their everyday lives. We thank Faust for helping our boys to develop these valuable qualities.” – Eugenie Hardy, 2018

“Started Faust when I was 8 and stayed until I was 18! Had the best years with some amazing teachers and students, many of whom are still some of my closest friends today. Thanks for everything, Faust!” – Sophie Burkhardt, 2018

“You guys always do such a great job with the kids, and they truly enjoy themselves too.” – Monique Ho, 2017

“My child explained to me the 8 required characters and their examples (from Star Wars and Harry Potter): the hero, the villain, the shape shifter, the wise guy, the funny guy, the sidekicks… Thank you sincerely for showing him the fun of writing!” - Faust Parent 2017

“Thank you for the course. Both kids are loving it! It's been hard to get them to read and write so this has been amazing.” - Faust Parent, 2017

“Stunning performance. Brought me to tears. You keep on amazing us.” – Audience Member of King Lear, 2017

“You all deserve Oscars!! Your commitment to your values was very impressive and moving. I was totally enthralled and you all held my attention for every second.” – Audience Member of King Lear, 2017

“The children in the show were brilliant, such young aspiring actors and actresses. A huge well done to them all.” - Audience Member of The Jungle Book, 2016

“I just want to say many, many congratulations to you and the JB Team on a fantastic production! I went to each of the three evening performances, and I have to say it got better each time.” - Audience Member of The Jungle Book, 2016

“Xavi had a great time on the summer programme. He is very shy in front of an audience, so to see him even participate after just a week was a credit to the teachers.” - Hollie Allman, 2016.

“I want you to know that I was riveted and blown away from the moment it started. The interpretation and adaptation was intelligently extraordinary, the maturity of the acting was powerful and captivating yet the stage and set was simple but incredibly effective. It required nothing else. I was completely drawn into the story immediately. The production was perfect. I loved it!” - Audience Member of Waiting for Godot, 2016.

“it was genuinely refreshing and inspiring to see such a young cast tackle this work and do it so professionally and successfully.” - Audience Member of Waiting for Godot, 2016.

“Priscilla enjoys the class very much. Saturday is something she's always looking forward to. Our Saturdays are no longer the same since she joined Faust.” - Deasy, 2016.

“Sita is having such a good time and comes home every Saturday full of stories and energy!” - Marga Stehmann, 2016.

“They love the games, the plays and the opportunity to experience the accomplishment of performing on stage. Both have developed themselves in different ways. My son has benefited from working as part of a team and was thrilled to be cast in his first large stage performance Treasure Island. My daughter has really blossomed and found her voice. She can now confidently join new groups and make friends with an ease she never had.” - Louise Sullivan, 2015.

“The great thing for us is that we can see what an impact it is having in her... She's incredibly confident performing in front of an audience and loves acting out stories . She also enjoys using different voices for characters in a story book which I attribute to what she's learnt at Faust as well.” - Kate Pallett, 2015.

“Thank you very much for the wonderful performance. Children were so excited all day and they all want to perform the poems on stage. You were so good at engaging them. We were all very impressed and we'll definitely pass on our recommendation to other teachers in school.” - Tomoko Clark, 2015.

“Alex and Hamish were absolutely fantastic with their pedagogy. I could easily feel their hard work and passion, which filled the room and touched everyone's heart. The children obviously learnt a great deal under their guidance and I would absolutely love to say a heartfelt thanks to them.” - Conor Shum, 2015.

“My children learned through Faust how to present themselves in front of audiences both in improvisation and with a script. They also learned how to interview for a part - a nerve wracking experience that prepares you for life!! All during this process, Faust made it fun for the children and they thoroughly enjoyed it.” - Marcy Trent Long, 2015.

‘It looked so natural for each actor to play their role as they have already “absorbed” their character into their own personality. Really great performance!’ - A parent watching a performance in The Faust Festival 2015.

‘Yiran has a fantastic time this week and it was a great performance done by everyone! I am so proud of Yiran as he was so confident on stage!’ - Yiran Tong’s Mum, 2015.

‘James did have great fun and improvement in the performances and over the whole courses. Thank you so much for all your staff's hard work to make the plays successful and impressive. We especially would like to thank and praise Nick's dedication and professionalism in leading the kids to enjoy and take part in the drama production. He really inspires the kids a lot.’ - James Tsui’s Mum, 2015.

‘I was very impressed by the professional way Faust handled everything from communication to drop off to pick up and everything in between. The little play at the end was very well organized, and I was impressed by how much the kids learned in such a short space of time. Having been to many, many different camps and children's activities in the past, I have to say that our experience with Faust was refreshing.’ - Dylan Harvey’s Mum, 2015.

“Ever since we started rehearsals in November we have enjoyed every second of Fantastic Mr Fox. It has truly been a once in a life time experience.” - Alex Hardy and John Hardy, 2014.

“Thank you so much for transmitting the love of theater to her. I can see that what she learn with you is helping her in her life. She was usually timid and never wanted to be on stage. Now she is becoming more and more self-confident” - Raffaella Cornaggia, 2014.

‘You can't imagine how happy my son has been at Faust! He has thoroughly enjoyed every single Saturday morning.’ - Matthew’s Mum, 2014.

‘The children had an amazing time and they are still 'buzzing' about it now!’ - Laura, Teacher at Harrow School, 2014.

“Thank you for the excellent time Eva has had at Faust over the past few years. Through the Faust classes I have seen Eva's self-confidence blossom and she looks forward to her weekly classes so much. Faust is so well run - it has been a pleasure to be involved with.” - Amanda, 2013.

‘You are all wonderful – blessed with a fabulous ability to tell stories!’ - A parent watching a performance in The Faust Festival 2013.

‘We have loved being a Faust family and supporting all your shows, as well as Freya enjoying workshops since the age of 5. Faust has formed a big part of Freya’s life in Hong Kong and she will miss it very much.’ - Freya’s Mum, 2013.

‘It was an absolute pleasure to watch the performance of Michael Morpurgo’s Kensuke's Kingdom. All the actors were working together so well in creating a highly vibrant show that brought the whole audience on board a sailing boat during the storm and onto the beautiful island with birds, turtles and monkeys. Every year we strongly admire your energy and power to bring children together and lead them towards brilliant accomplishments. We would like to thank you for everything you are doing with all these talented children; you broaden their horizons and motivate them to improve themselves.’ - A member of the audience of Michael Morpurgo’s Kensuke’s Kingdom, 2013.

I laughed, teared up, and was genuinely impressed with every actor’s performance. Well done everyone on your incredible dedication.’ - An audience member of Our Country’s Good.

‘Jess absolutely loves every minute of Faust so expect to see her around for many more years to come!’ - Jess’ Dad, 2012.

‘Kestrel loved Faust so much! She really learned a lot and discovered a passion for drama that I'm sure she will continue to develop in the future.’ - Kestrel’s Mum, 2012.

‘Faust has transformed my once shy and insecure girl into a budding actress preteen (!)who enjoys her drama classes more than anything and really had a blast performing in The Wind in the Willows performance this year. Thank you to all your staff for making this happen. You have a wonderful programme that does a world of good for kids’. - Faust Parent, 2012.

‘I can’t wait until my child is old enough to audition for one of the shows, it was amazing.’ - Audience member of The Snow Queen, 2012.

‘I thought the show was amazing! What you guys did with those kids was just brilliant.’ - Audience member of Roald Dahl’s The BFG, 2011.

‘Wonderful! Tears at the melting snowman. Well done!’ - An audience member of The Snowman, 2011. 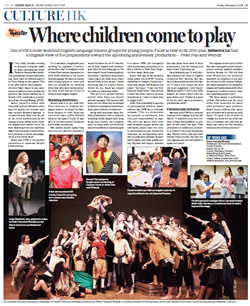 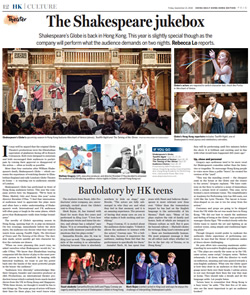 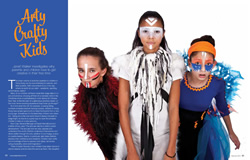 December 2016
Around DB: Behind the Scenes 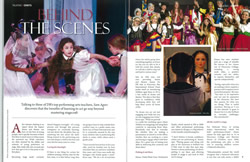 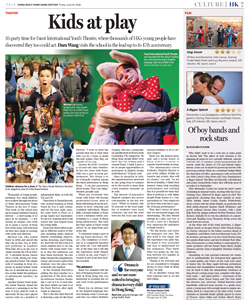 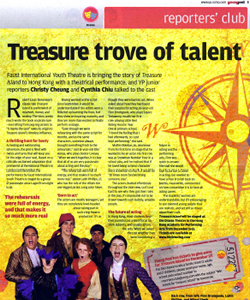 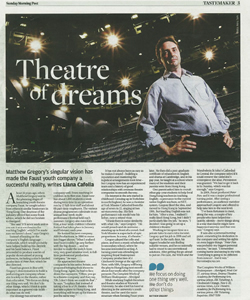 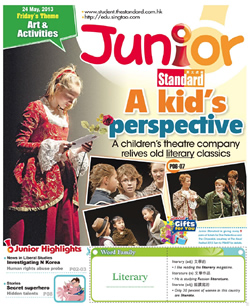